The UNM School of Public Administration (SPA) is reaching a milestone five decades in the making. On Feb. 11, SPA will celebrate 50 years of educating students for leadership and administrative roles in government, nonprofit and interdisciplinary organizations.

“Regardless of where our graduates go,” said Bruce Perlman, director of SPA. “We know that they leave our program with the diverse skill set necessary to bring strong leadership to their workplaces, pursue resilient managerial habits in their careers, and build foundations of ethical and efficient Public Administration throughout New Mexico, the United States and the world.” 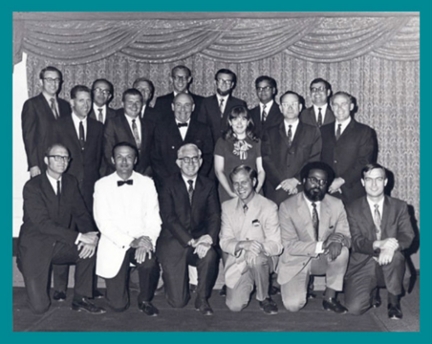 SPA began as an idea from former UNM President Ferrel Heady, who served the institution from 1968 – 1975. It was early in his term, 1969, when Heady first told faculty and staff about his idea to prepare and train individuals for the growing complexity of modern management in the public sector.

From those first conversations grew the division which today is the School of Public Administration. The first UNM SPA graduating class in 1970 is pictured right. In 1980, its MPA was one of only 45 graduate programs accredited by the National Association of Schools of Public Affairs Administration (NASPAA). In 1986, it was listed as the eighth largest Public Administration program in the country. In 2018, the SPA was recognized as one of the top 100 public affairs programs in the country by U.S. News and World Report.

Since its inception, close to 2,000 individuals have received master’s degrees in Public Administration (MPA) and - since 2013 – in Health Administration (MHA) from the UNM SPA. Most continue to serve the public in federal, state, local, tribal and nonprofit agencies in managerial, policymaking and other leadership roles. The School’s graduation numbers speak for themselves: 81 percent of SPA graduates go on to work in health, education or government, seven percent join the non-profit sector, and the rest go on to further their education or join private enterprises.

Over the last 50 years, SPA has become a driving force for public administration education in the state, and its leadership plans to make the next 50 years just as, if not more, constructive.

“After 50 years, we’re just getting started,” Perlman concluded. “Our possibilities continue to expand as government and non-profit entities grow, face new problems, and become more complex, and the UNM SPA is right there with them – making sure future leaders are prepared for whatever challenges their careers bring them.”