UNM President Garnett S. Stokes gave the keynote address Monday night, focusing on safeguarding the value of higher education. She spoke about the importance of attaining a college degree and challenged the crowd to not only tell the story of what academics do, but also why it’s of value.

“By not explaining and reaffirming the way in which we really do provide value to the public we serve, we allow other stories to be told,” Stokes said. “These counter-narratives which are created devalue the genuine and very real benefits of our essential mission.”

Stokes referenced a number of surveys supporting her message, including a 2017 Pew Research study which found only 55 percent of Americans say college has a “positive effect on the way things are going in this country.” Similarly, a Gallup poll showed a staggering 56 percent of Americans say they have “some or very little” confidence in colleges and universities.

The national trends are mirrored in New Mexico, where a statewide image and perception study last year showed that only 35 percent of people agree a college degree is necessary for young people to succeed in the work place.

Stokes suggested the cure to the dwindling perception of higher education could lie in changing the narrative. She asked the crowd to consider how to increase confidence in colleges and universities – through positive personal experiences, mentorship and alumni reputation.

Many of those in the crowd were alumni of the UNM School of Public Administration (SPA). The RSVP-only guest list included former and current state leaders, the Bernalillo County District Attorney (and last year’s Blumenfeld Lectureship keynote speaker), several Albuquerque city officials and many of the SPA faculty. In addition, countless University of New Mexico deans, faculty and staff members were in attendance.

“There is no doubt that the School of Public Administration values community relationships,” said Bruce Perlman, director of SPA. “The crowd gathered tonight is indicative of those ties, and is a strong reminder of how our faculty, students and staff have a personal stake in New Mexico’s prosperity and quality of life.” 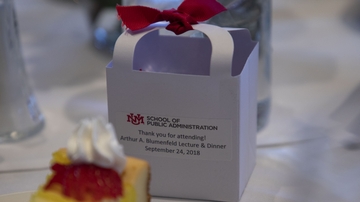 The Arthur A. Blumenfeld Endowed Lectureship honors the life and work of Arthur Blumenfeld, the former national president of the Government Finance Officers Association and former Chief Administrative Officer for the City of Albuquerque. The lectureship is intended to facilitate excellence in public administration and finance.

“To say we are proud to have President Stokes as our speaker tonight would be an understatement,” said Bruce Perlman, director of SPA. “The turnout to this year’s event was considerably higher than previous years, and we were honored to have such an inspiring leader give the keynote address.”

Click here to read more about the Arthur A. Blumenfeld Endowed Lectureship, or to make a donation to the endowment.